A Portable Antenna for Mode B and J Satellites 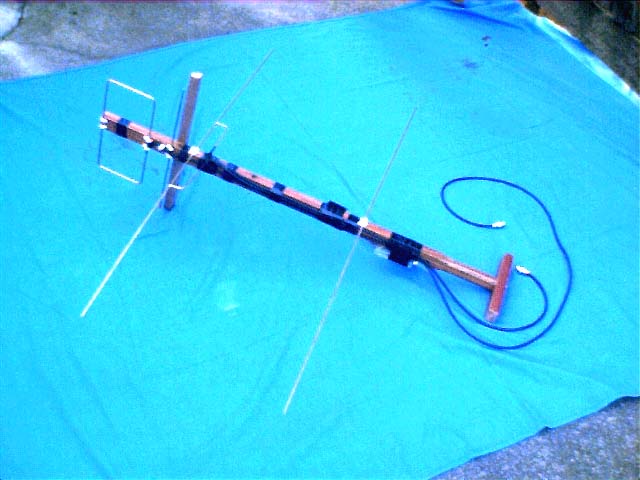 While I've made a point elsewhere that amateur satellites can be worked with minimal gear, if the satellite and conditions are right, having an antenna which is better than the typical rubber duck or shack vertical can enhance one's enjoyment of this fascinating aspect of Amateur Radio. In my case, I had been working SO-35 with a 1/2 wave on 70cm and a 1/4 or 5/8 wave on 2m. With these antennas and a little planning, it is possible to work this bird from a train! However, not all passes are created equal, and there are also other satellites to work. For example, UO-14, which was recently reconfigured as an FM repeater, after many years of data service, or the Fuji birds, FO-20 and FO-29. It is difficult (though I have done it) to work UO-14 on the antennas I used for SO-35, and even more difficult to work FO-20 this way. To access these birds, I needed better antennas. After a bit of hunting around on the Internet, I came up with what I thought was an easy to construct, yet effective portable antenna.

On 70cm, the Texas Potato Masher, designed by Jerry, K5OE, looked quite good. On later experimentation, I discovered I didn't nead the circular polarisation, as with a portable antenna, one can manually rotate the beam on its axis to eliminate polarisation errors, so I only used one loop of the TPM II design, which I will call the "Linearly Polarised TPM II", or LPTPM II, for short. I didn't bother with impedance matching and decided that the performance, even with the expected 2:1 VSWR mismatch was excellent. Terrestrial tests on repeaters and simplex, as well as on air tests on UO-14 showed this antenna to be an excellent performer all round.

For 2 metres, I ended up going for a 2 element Yagi, using the well known DL6WU program to calculate the measurements. The driven element is fed by a T match, which is soldered in place - again I favoured simplcity and ruggedness over electrical perfection. The Yagi is mounted at 90 degrees to the LPTPM II on the same boom, and just behind it, to minimise interaction. However, there is the option to add a third element to the Yagi if a little more gain is required. The third element would go through the middle of the loop of the LPTPM II.

Construction of this antenna should present few problems. The antenna is made out of 3 mm thick brazing rod, which was obtained from a local welding supply shop. This material is easy to work with and solder. For the LPTPM II, I used the dimensions given on Jerry's site. The loop is 107.5 mm by 240 mm, with a gap of 10 mm being left in the rear "long" side of the loop to attach the feedline. The reflector is 336.5 mm long, and is mounted 50 mm behind the loop.

The feed is a T match. The arms of the T connect to the driven element 115 mm each side of the centre point of the driven element. A 4:1 balun, constructed out of a 1/2 wavelength of RG-58 coax is used to couple the T match to the 50 ohm feedline.

Optionally, a director of 931 mm length can be added 162 mm in front of the driven element (if the antenna is constructed as described, it should pass through the centre of the LPTPM II's loop). I haven't installed the director on my antenna, the 2 element Yagi works quite well as it is.

Drawings with dimensions are shown below for both the 2m Yagi and 70cm LPTPM II.

The LPTPM II has been tested extensively on UO-14 and terrestrial paths. It is capable of receiving the satellite's downlink practically from horizon to horizon, and despite the relatively weak downlink, it is possible to hear the downlink well before being able to access the bird with a couple of watts into a 5/8. On most passes, the LPTPM II will hear UO-14 from horizon to horizon with few fades. The 70cm antenna can also receive FO-20's beacon down to the horizon, even with a few dB of coax loss between it and the receiver, and from a very poor location.

The 2m Yagi has only recently been added and shows much promise. Tests through FO-20 with 2 Watts power gave a strong return carrier on the downlink, strong enough to be full quieting on an FM receiver. 1/4 W on the uplink gives a noisy carrier on the FM receiver, and certainly enough for an SSB or CW contact (Anyone for QRP? :) ). Unfortunately, the HT I was using on 2m has a "sloppy" button, so I was unable to attempt a CW contact (my attempt was very QLF!). However, any CW I sent would have been rock solid into the bird. I need to build another transverter for the 10m box before I can work SSB through FO-20, though HT sent CW is always a possibility. ;-)

For those people who are stuck in a unit or apartment, there is no excuse not to work satellites, as this antenna is portable, and you don't need much power into it to get good results.

Anyone looking for a demonstration of this antenna's performance is welcome to download the audio tracks below from UO-14 and SO-35. The audio was recorded off the downlink receiver, i.e. exactly as I heard it off the beam.

UO-14 - This was a 50 degree elevation pass. Note the stability of the downlink signal. My 2m uplink was 2 watts. Most of the stations present were having difficulty hearing the downlink.