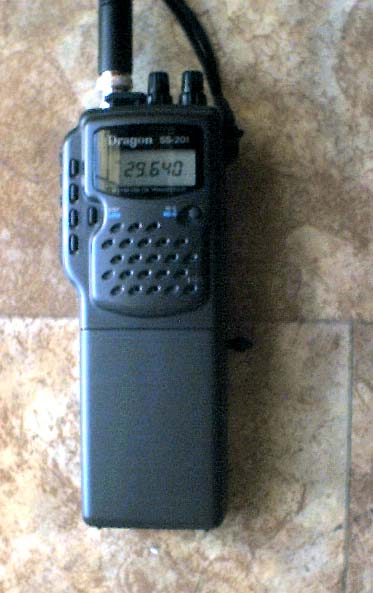 The Dragon SS-201 is a little different to the run of the mill handheld. It operates on 10 metres, instead of the more traditional 2m or 70cm, and it is capable of AM, FM and SSB modes. The origins of this radio, like most of the 10m only radios lie in the 27 MHz CB band, where there is a demand for "export" radios. While this means there is an increased risk of piracy on 10 metres, it also means there is now no excuse for us amateurs not to occupy this interesting band, as inexpensive gear such as the Dragon is now readily available.

The Dragon was packaged in a professional looking box which looked a little more "flashy" than the usual bland boxes amateur gear comes in. Inside was the radio, a battery case (where's the batteries?), manual, carry strap and, as a nice touch, a 12V cigarette lighter lead, so the unit is ready to run mobile (assuming you have an antenna on the car). The manual is "dumbed down" and obviously intended for those who intend to use the Dragon as a standard 40 channel CB transceiver. No mention is made of the "VFO mode", repeaters or other amateur specific features, which are activated by means of a special key sequence once the radio is powered up. It's worth noting that the channelised mode of the radio, while defaulting to the standard 40 (US/Australian) CB channels (plus extra "in between" channels 3A, 7A, etc), actually can be set to one of 10 bands, which allows the radio to cover from 25.165 MHz to 29.695 Mhz in 10 kHz steps (eeeek!).

Speaking of powering up, a couple of annoying "features" immediately made their presence felt. Firstly, the radio powers up in channelised mode, tuned to the CB emergency channel (channel 9) and in FM(!) mode. Hardly a useful combination for either CB or amateur operation. Secondly, a LOUD beep is emitted from the speaker every time a button is pressed. Unfortunately, the volume control has no effect on the loudness of the beep, which is highly annoying, and if you're using headphones, potentially damaging. Can we please have the beep before the volume control guys?

While speaking of niggles, two other issues spring to mind. There is no battery backup for the radio's memory, so all previously used data is lost when the radio is turned off, and one has to go through the process of setting up VFO mode, the desired frequency, repeater offset, mode, etc, which typically requires a dozen keystrokes and associated beeping, before the rig is ready for use! Even pinching a few microamps from the main battery to keep the operating data in memory while the rig is turned off would have sufficed. The other annoyance is that setting the volume to minimum does not fully quieten the radio. A minor quibble.

Back to the battery case. It was a surprise to discover that no batteries were surprised with the Dragon. Instead, the battery case splits open to reveal spaces for 9 AA cells. However, while this was an obvious cost cutting measure by the manufacturer, it is an advantage for the end user. Firstly, one can choose their preferred type of battery (I went for 1300 mAh NiMH cells), and secondly, once the cells wear out, it's only $30 - $40 for a replacement set of cells, instead of $100 or more for a new pack. A trickle charging circuit is built in, so once the cells are loaded into the pack, it's like a normal rechargeable battery pack to use.

Once the quirks of the Dragon were sorted out, operation of the rig is quite simple and the manual is not really needed, which is just as well, as it doesn't cover VFO mode at all. The SS-201 passed the "turn on and fly without RTFM" test with ease. However, I did notice that the pushbuttons don't seem to be properly debounced, which can result in multiple keypresses being registered if you press a key once lightly.

Due to antenna limitations and the home QTH not favouring the centres of local 10 metre activity, initial operation was on receive only. I initially had a listen through the CB channels, and quickly found some of the usual loudmouths on 35 LSB. The resolved audio was excellent, and the receiver sensitivity seemed to be adequate. In addition, any signal above S1 sounded quite strong and clear. Listening to truckies on AM and the VK3RHF 10 metre repeater gave similar results for AM and FM. The SS-201 also proved itself capable of easily receiving the beacon and transponder downlink of the RS-13 satellite, using only a 1.8 metre long helical CB whip antenna on a magnetic mount. The receiver does include an RF gain control, which I haven't had to use so far, besides verifying that it does work. The only negative point about the receiver is that there is no noise blanker, which would be useful for mobile operation.

During my satellite tests, a quirk of the tuning system became obvious. Like a number of other handhelds, the Dragon sports a "step" button, which is to select the tuning steps (which are 1kHz, 10 kHz and 100kHz). However, unlike other radios, this function doesn't simply alter the tuning steps, but it is actually a 4 position toggle. The normal setting is to tune up and down the VFO range in 10 kHz steps. Pressing the step button drops the radio back to 1 kHz steps, but now, the up/down buttons affect only that digit of the frequncy. Pressing the step button again switches the focus to the 10 kHz digit, and a third press switches to the 100 kHz position. Again, only the highlighted digit can be changed. A fourth press of the step button puts the radio back into normal 10 kHz step tuning mode. This makes some small frequency changes a frustrating exercise, if you need to go from (say) 29.469 to 29.470 MHz. Such a QSY would take several keystrokes instead of the one you'd expect.

Perhaps the most disappointing aspect of the SS-201 is the alignment of the transmitter. The transmitter is obviously aligned with CB operators in mind. The modulation in all modes was set low, especially the FM deviation, which was so low that the transmitted audio is inaudible through the VK3RHF repeater, and barely audible on a scanner in the same room. AM and SSB were somewhat better (i.e. useable), but it still took a good shout to get a reasonably loud signal on AM. Apparently, this is how the Dragons are aligned in the factory, with the especially poor FM result being due to the Tx being conservatively aligned for 1.5 kHz deviation (as used on CB in European countries), instead of the 5kHz that our 10 metre repeaters use. However, at least one distributor will be realigning the radios before they're sold, so this may not be a problem in the future. It is worth noting that what audio that could be heard seemed to be of fairly high quality.

The Dragon SS-201 is a unique radio with lots of potential and a number of annoying little quirks. For the portable 10 metre operator, it can't be beaten, as there is no other radio on the market with the same degree of portability and versatiliy (there is another 10m handheld on the market, but it doesn't include FM). If the quirks of the radio were to be addressed by the manufacturer, this could one very good 10 metre rig. Gone are the days where "10 metres pedestrian mobile" meant a converted CB, gell cell and a mobile whip on a golf buggy! The Dragon does it all in one neat package.

This review is copyright Tony Langdon, 2000, All rights reserved Persons or organisations wishing to distribute part, all, or a derivative of this review are welcome to email me on the link below. Unauthorised distribution is prohibited.

This review is provided for the benefit of radio amateurs, and was independently written by me without the assistance of or under the direction of any other party, continuing my tradition of reviewing most new radio equipment I purchase.