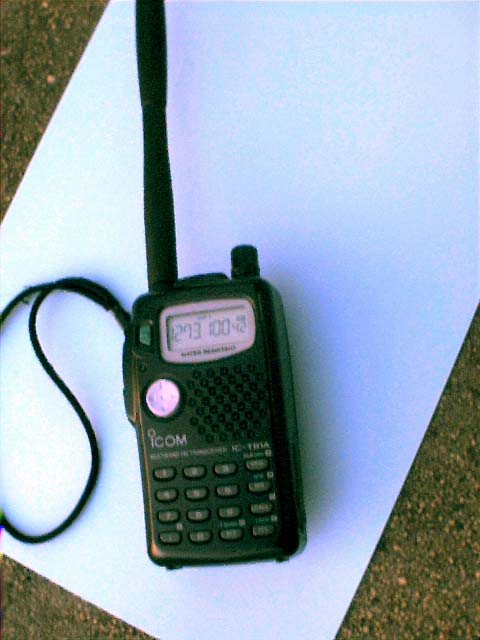 The IC-T81A from Icom is the first 4 band handheld transceiver on the Australian market. After the batteries in my dear old Alinco dual bander got fried by an short in the charging jack, I was forced to consider my options for a new radio, as the battery pack on the Alinco contains as much Super Glue and sticky tape as it does plastic! The replacement radio needed to meet several criteria:

I considered several contenders, after ruling out everything with less than 3 bands. This left the short list of the Icom IC-T8A (tri band) and IC-T81A, as well as the Yaesu VX-5R. I chose the IC-T81A over the others for the extra band (23cm) it offers.

Being used to "old fashioned clunkers" like the Alinco and Icom classics such as the 02/04 series and the IC40G UHF CB, the T81A was a bit of a shock, being about 1/2 the size of the above radios. The front panel is surprisingly uncluttered, due to the use of a joystick like "multifunction switch". As most of the radio's functions are accessed by manipulating the multifunction switch, the IC-T81A doesn't lend itself to "feeling your way around". The advice usually handed out to computer novices definitely applies here... RTFM! (Read the ..Fine(!) Manual). Speaking of which, the manual is reasonably clear for the most part, though the multifunction switch needed a bit more of an introduction at the start. Icom also saw fit to include a quick reference card which you can carry in your pocket. Excellent move guys.

Despite the counterintuitive nature of the controls at first, the IC-T81A is actually very easy to use, especially one handed. Most functions are only a few pushes on various parts of the joystick, followed by pressing the "VFO" button, which does double duty as an "enter key". My only criticism of the joystick idea is that it could have been about 50% larger, as it's sometimes hard to find the "centre" position. The only other minor gripe I had with the radio at this stage is that there is no way to charge a spare battery pack, without purchasing the optional desktop charger and adapter. This will mainly affect those who have more than one battery pack, such as myself. The lack of external charging facilities makes rotating battery packs somewhat more difficult. However, the optional desktop charger is well built and a must for any serious portable operator. It is capable of charging a totally flat battery pack within 90 minutes, and shuts off autimatically when charging is complete.

After taking picking up the IC-T81A and a quick glance of the manual, I put the radio on charge for a few hours before the trip home on public transport. Tuning around while still in the city, I found an aquaintance on the 53.900 MHz Mt Dandenong repeater. 1.5 watts into the supplied rubber duck made the contact with some difficulty. As the other station also had 23cm, we QSY'd to VK3RCC on 1273.100 MHz (Woah! 1220 MHz in one button push is a BIG QSY!). Being practically underneath the repeater made for strong signals, and the Icom got good audio reports. Switching to simplex on 23 revealed a receiver which appears to be very sensitive. This sensitivity was evident on all 4 bands, and repeaters which the other radios here can't find come through clear on the IC-T81A.

The following day, I pitted the Icom against the trusty old Alinco on VK3RSE (439.375 MHz), where I usually converse. Both radios were running similar (1.5 watts) power, but the Alinco was using a 70cm 1/2 wave, while the IC-T81A had the supplied rubber duck fitted. Despite the expected difference in antenna performance, both receivers received the repeater at about the same strength, but the Icom was able to reject the strong QRM from the many commercial 2 way transmitters in the city, which plague the Alinco, even with its attenuator turned on. However, on 2 metres, the Icom dropped its bundle in the presence of strong paging transmitters, as did the Alinco. However, the latter's attenuator is able to control the interference, even when a high performance antenna is connected. Two metre handhelds really need that attenuator to cope with the pager rubbish prevalent in urban areas these days. On transmit, the Alinco scored slightly better, though the Icom's audio was rated as "not bad". A later test with an external speaker mic earnt the Icom top marks for audio quality. Further audio reports over time favour the Icom almost unanimously.

I did some comparisons between the IC-T81A's rubber duck and the "reference" 1/2 wave ground independent I use for train mobile work. As expected, the 1/2 wave performed somewhat better, but the little multiband rubber duck was surprisingly good, only an 'S' point or so less sensitive. The rubber duck has very good performance on 23cm, equivalent to a 1/2 wave. Even on 6m, where size is a major issue, the rubber duck performs surprisingly well, with the VK3RMS repeater on Mt Dandenong being accessible from 50km or more away. The limitations of the rubber duck are most noticeable on 2 metres, because the antenna is small relative to a wavelength at this frequency, and full sized antennas are still practical (unlike 6m, where a 1/4 wave with proper grounding is clumsy to handle on a handheld - yes, I have tried this!).

The Icom IC-T81A as supplied in Australia offers extensive out of band receive capabilities, covering most of the spectrum from 50 MHz to 999 MHz (plus 23cm, of course) with few gaps. Mode selection is automatic, with AM for the 118-136 MHz aircraft band and wide FM in the broadcast FM band, and either AM or wideband FM are optional for some of the non amateur bands. Outside the amateur bands, the receiver performance isn't as good as within, but it is still more than adequate for most purposes. Broadcast TV and FM stations can be clearly heard on a scanning antenna when portable around town. The only blemish here is that wideband FM receive can't be selected for the 54 - 88 MHz band, which means one can't listen to the ABC TV channel 2 transmitters. Another minor annoyance is that the 70cm (400 - 600 MHz Rx) band is split into two subbands - 400 - 470 MHz and 470 - 600 MHz. In the second subband, wideband FM can be selected to allow reception of TV audio. However, in Australia, the TV band doesn't start until around 520 MHz which means constant fiddling of the mode setting when switching between UHF CB (477 MHz) and TV reception. On VHF, the "subbands" work well, and my Icom is permanently set to wideband FM here for TV reception, switching automatically to narrow FM for the 136 - 174 MHz subband.

I also had the opportunity to put the Icom IC-T81A through its paces on some test equipment. Unfortunately, I couldn't test the 1200 MHz performance, but the other 3 bands showed some interesting results. Firstly, the frequency accuracy was within a few Hertz of the displayed frequency on 6m, 2m and 70cm. Based on this consistency, I'd expect 23cm to show similar performance. On the 9.6V battery pack, the transmitted power was 5 watts exactly, with 3.5 watts on 70cm. Deviation was pretty much spot on at 4.5 kHz. Out of band performance wasn't rested, though on air comparisons with a UHF CB show the Icom to be useful though noticibly less sensitive than a dedicated receiver at around 477 MHz. Overall, the test results were very good, with remarkable consistency demonstrated across the 3 bands tested.

The test results are summarised in the table below:

Overall, Icom's IC-T81A is a very versatile package, ideal for frequency agile amateurs looking to travel light. While it lacks some of the features of other radios, such as Yaesu's VX-5R, it performs solidly on all of the 4 bands it covers. If you want maximum band coverage in a tiny package, this is the one for you.

This review is copyright Tony Langdon, 1999, All rights reserved Persons or organisations wishing to distribute part, all, or a derivative of this review are welcome to email me on the link below. Unauthorised distribution is prohibited.

This review is provided for the benefit of radio amateurs, and was independently written by me without the assistance of or under the direction of any other party, continuing my tradition of reviewing most new radio equipment I purchase.